I spy with my little eye scientists acting deceitfully

In my last post I said that highly cited papers become a stronger part of the literature than less cited papers and those that are never cited. I also said that the porportion of uncited papers now is similar to that in 1973 but here are some interesting graphs created by Scopus rather than from looking at citations in Google Scholar, which had suggested this 40-50% level of uncited articles. 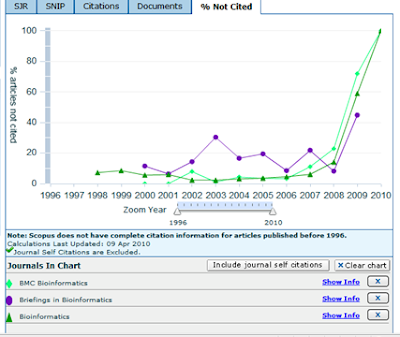 So this suggests that actually only a very small percentage of articles are not actually cited and that over time this approaches nearly 0% for Bioinformatics and BMC Bioinformatics. This seems a little bit odd given the previous results. So what happens if Nature and Science are added to the chart? 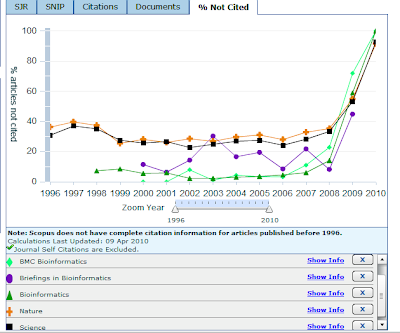 Nature and Science have a similar number of uncited papers as the 1973 study and the study using Google Scholar. So what is happening that the Bioinformatics journals are more highly cited than Nature and Science? There are two possibilities:

So scientists have learned to play the system, but only those who publish in the discipline specific journals seem to be playing. The big names who get the Nature and Science articles don't care. This is a response to the way Tenure is earned in the States and many other countries and the way funding is calculated by the RAE in the UK.
Posted by Andy at 11:08

I remember citation being a bone of contention in Exeter. Like your good self explains, I 've had similar advice from someone who's been published lots of times (though I haven't been myself I hasten to add).