The paucity of argument from the ever lovely James Delingpole

For someone educated at public school and then Oxford, James Delingpole shows a distinct lack of intellectual ability. He is rather easy to bait and also rather pathetic in his responses. He seems to think that abuse and vulgarity are how to win arguments. He did study English Literature and not Classics, so he does have some excuse for a lack of rhetorical ability, but as some sort of journalist you might have thought he could have picked it up in the job.

Anyway here is his Twitter conversation about the new citizenship exam and the need for rote learning of dates. I am against rote learning of anything as it leads to superficial learning that is not long lasting, nor useful. Without context we learn nothing properly and why do I care what the date for the Peterloo massacre is? I have Wikipedia, if I know the events exist then that is enough, knowing their dates is a rather useless fact. Approximate dates or knowing the period in which events occur is useful. Having Peterloo in the Middle Ages would not be good but knowing the exact year, month and day is irrelevant. 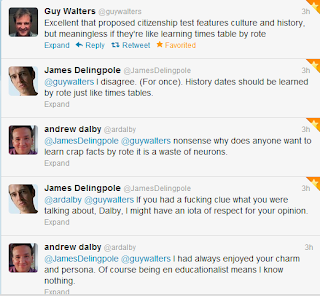 Ok so I did go in hard calling them crap facts but really dates over significance - who cares. Nobody learns times tables by rote any more and if you think about how you learn them only very bad students ever did. You learn them from the pattern not memorizing seven times eight is fifty-six (well that is one you might go but deep learning uses the patterns and cheats of estimation and rounding). Anyway I was the best in my class at mental arithmetic and you do not rote learn the times tables. So his response is that I do not have a fucking clue and that he does not care about my opinions anyway. A couple of points on this:

1) He does care or he would not have posted a reply.
2) Saying others views are irrelevant without any sort of reasoning is a very poor argument.

Then I have an appeal to expertise about learning. So how will James reply. I know he has a low opinion of all the new ideas. He would like us to stay in the 1960s as far as education goes and he is probably a big supporter of "Gove levels". He is going to be a didactic traditionalist and not a constructivist. To him Skinner's methods are the pinnacle of psychology and he might give a nod to cognitive science but only briefly. 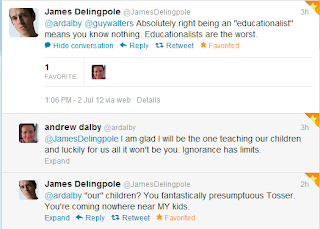 Yep he hates educationalist. He is an example of that oxymoron the anti-intellectual pseudo-intellectual. I hate clever people but I think I am clever and therefore right and I will stick my fingers in my ears if anyone says anything else. So a closed and non-pragmatic mind, a mind ignorant of any views other than those they already hold.

So back to vulgarity. I am now a Tosser and that makes him so big. No Mr Delingpole you are not big and you are not clever. Our children means in the wider sense. I am afraid that your views of education will go the way of the dinosaurs. I will hopefully never have the pleasure of teaching the spawn of James Delingpole but I know that the system that will teach them will be much closer to my view than his.