Bill Gates was shown around the NIH where they wanted to show him how VR helps to create better vaccines.

As I said in another Blogpost. I began my research career in structure based drug design.  Then I learned that you models are only as good as the data you feed in and so I moved down the pipeline, first to crystallography and now to sequence data analysis. I know the limitations but the NIH wants money and they are less likely to talk about them.

The limitation in influenza research is sampling. We simply do not collect the data properly. We have lots of data from China because that is where we think future outbreaks might come from, but the last Swine Flu pandemic originated in Mexico. There is not enough systematic global collection of data. This means that unexpected changes catch us unaware. Most of the times we do pick the right vaccine candidates but sometimes we get it wrong. VR will not help this.

What will help is the IOT. That provides an opportunity for massive data collection. The Cloud allows us to share data globally. If we can stop the national laboratories from hoarding data this would also be a big step forward. The WHO also needs to be reformed to remove some of the political players who are a barrier to sharing. Scientists are bad politicians. My dad worked on a funding committee and they had to move meetings to secret locations because the scientists were always trying to lobby then and bully them into decisions. In influenza research there is a ruling clique that wishes to restrict research participation. When you mention citizen science or data sharing they have a fit.

So what should we be looking at today?

1) Why is there a wide-spread breeding failure in the Celtic seas? Is this related to the death of marine mammals? Both of these sets of species are possible influenza sources/sinks and it might be a good idea to do some influenza viral screens to see if a new more pathogenic strain has evolved. If it is an influenza it is probably H7 or H3 and that it can affect mammals would be a concern.

2) H5N8 from Viet Nam is a new emerging highly pathogenic H5 containing lineage. We had an outbreak in Korea that spread to North America and also Europe but it does not seem to be able to persist in either Europe or North America (although for North America that is disputed). However the most recent European cases are not related to the Gochang and Buan Korean lineages, but to a Viet Nam sequence that again spread via Korea. 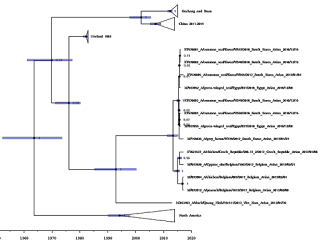 The key is vigilance, wider participation and thinking outside the box. The bird breeding might be nothing and unrelated but lets do a quick check. Improved data collection and screening is where we will make the break-throughs not in the VR lab.