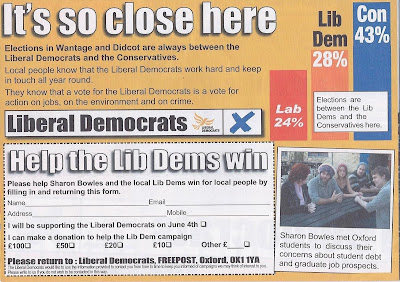 This is just so funny to anyone who knows anything about charting. The Liberal Democrats have taken the data and manipulated it to look as though it is a close thing between them and the Conservatives and that Labour are a weak third, when actually the Conservatives are clearly ahead and Labour are almost in the same position.

I was formerly a Liberal Democrat councillor and I know what you are told to do by the campaigning offices (ALDC used to drive me mad as they just do not know my constituents, who were very well educated and middle class) but sometimes perhaps a little less spin would do us more good.
Posted by Andy at 14:05